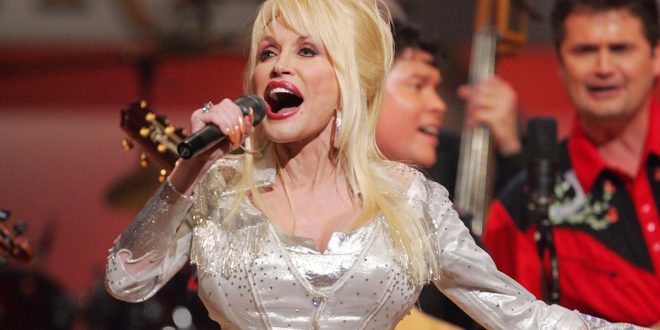 In celebration of Dolly Parton’s 50th anniversary as a Grand Ole Opry member, the Grand Ole Opry is hosting Dolly Week 2019-a week long series of events and special Opry shows to honor arguably country music’s greatest global ambassador and an artist who has taken the Opry with her wherever she goes.

Parton will be performing on Sat., Oct. 12, capping the week-long celebration of Parton’s impact on music and the Opry.  Buy TICKETS!

In celebration of Dolly Parton’s 50thanniversary as a Grand Ole Opry member, the Opry House will host “Dolly: My Opry Memories”- an exclusive exhibit featuring 24 wardrobe pieces the internationally-known country music icon has worn on the Opry stage and at events held at the Ryman Auditorium over the last 50 years. The exhibit will run through October 31.

Among Parton’s fashions featured:
Dress worn on the evening of her Opry induction (1969)
Gown worn for a duet with fellow Opry member Vince Gill on her monster smash “I Will Always Love You” (1995)
Ensemble worn during a surprise Opry appearance to celebrate the 40thanniversary of Reba McEntire’s Opry debut (2017)

Also included in the exhibit in the Opry House’s historic Studio A are exclusive videos of Parton recounting some of her favorite Opry memories along with rarely seen performance clips spanning her five decades of Opry membership. The limited-time-only exhibit was curated and designed to celebrate Parton’s milestone anniversary and tells the storied career of one of the Opry’s greatest global ambassadors.

Tickets for the “Dolly: My Opry Memories” exhibit are $12 when guests add it on to the purchase of an Opry backstage tour. Exhibit-only tickets are $17. Packages and tickets are on sale now at www.opry.com. Please check opry.com for available tour times.

As part of Parton’s 50th Opry anniversary celebration, flagship station WSM flipped its Opry Nashville streaming channel to “Dolly Radio” to coincide with the exhibit. The 24/7 “all things Dolly stream” will feature the music legend’s many hits from her catalog of over 3000 songs, past Opry performances, archived interviews, special features from fellow artists, and much more. Fans will be able to access “Dolly Radio” 24/7 via WSMonline.com and the station’s free mobile app.

THE OPRY SHOP – located at the Opry House

In celebration of Parton’s 50 th Anniversary as an Opry member, The Opry Shop—also located at the Opry House– will feature a unique collection of eleven custom-designed items for women, men and children celebrating the milestone anniversary. A special Dolly Parton Queen of Country 50 th Anniversary graphic was created by Opry Entertainment Product Development Manager Molly Brooks, who was inspired by a Parton photograph captured by longtime Opry photographer Les Leverett.

Music editor for Nashville.com. Jerry Holthouse is a content writer, songwriter and a graphic designer. He owns and runs Holthouse Creative, a full service creative agency. He is an avid outdoorsman and a lover of everything music. You can contact him at JerryHolthouse@Nashville.com
Previous Watch: Cole Swindell Premieres “Right Where I Left It”
Next Ashley McBryde To Be Awarded CMT’s “Breakout Artist Of The Year”