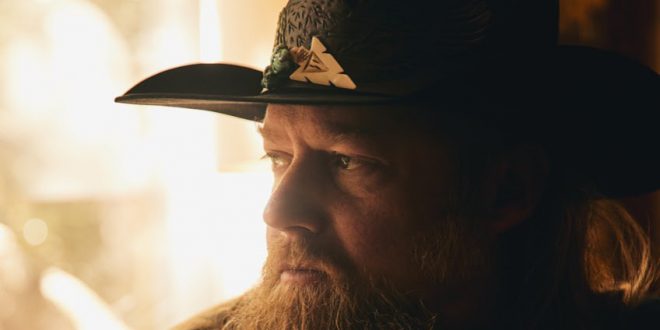 Country Music fans lamenting the demise of a traditional sound need look no further than Gethen Jenkins and his debut single, “Bottle In My Hand.” Jenkins laid down his powerful, gut wrenching, baritone sound on this steel-drenched shuffle being serviced to Country radio and streaming services now on the Five Music Company label distributed by Sony/The Orchard.
A native of Huntington WV and current resident of Southern California, Jenkins’ influences can be heard throughout the upbeat single – a song he wrote completely solo. “Bottle In My Hand” is the first glimpse into the soul of the 6’5” mountain of a man whose songs are of considerable depth and meaning, driven by passion, and full of heart and spirit, which are sure to run the gamut of human emotions.
“‘Bottle In My Hand’ is a shuffle about drinking, doing your own thing, not letting anybody slow you down,” said Gethen. “It’s a rowdy drinking song. When we first started playing music, I didn’t play any shuffles at all because I didn’t understand what they were. I got mad at myself and sat down on my bed one day and said, ‘dammit I’m going to write a shuffle’… and I did, I wrote one… and I guess it’s pretty good.”
Produced by four-time GRAMMY Award winner Vance Powell (Chris Stapleton, Jack White, Tyler Bryant & The Shakedown) and recorded at Nashville’s famed Sputnik Studios, the single is the first release from Jenkins’ debut album that will hit in early 2019. Mike “Cheez” Brown, best known for producing and managing Sublime with Rome, executive produced the project and also manages Jenkins.
Jenkin’s journey began surrounded by American music, from the purest of Bluegrass to whiskey soaked Honky Tonk. Music took hold at the age of eight, beating on his dad’s Gibson guitar. His teenage years were spent in Galena, a rural Indian village on the Yukon River, deep in the Alaskan tundra. After eight years in the U.S. Marine Corps, Gethen landed in Southern California. Returning from Iraq, determined to sing his own song, he found a home in Country Music with his five-piece band The Freightshakers (since revamped as Gethen Jenkins). Over the next several years Gethen immersed himself in his music, working hard to create a unique sound keeping true to his roots.

Music editor for Nashville.com. Jerry Holthouse is a content writer, songwriter and a graphic designer. He owns and runs Holthouse Creative, a full service creative agency. He is an avid outdoorsman and a lover of everything music. You can contact him at JerryHolthouse@Nashville.com
Previous Bobby Bare Announces New Podcast
Next Old Crow Medicine Show Returns To The Ryman