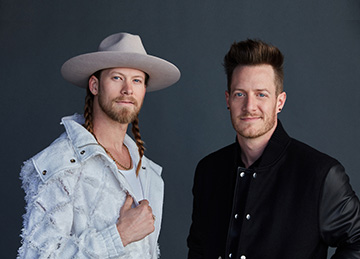 “We’re excited. In February, we’re releasing our fourth album,” FGL’s Tyler Hubbard shared with ET. “I think Feb. 15 is the official date, so we’re really excited. We’ve been working on that album for over a year now, so BK and I are definitely ready.”
FGL’s Brian Kelley added, “You can say a lot of things. You can call somebody a lot of different names and have a lot of different opinions, but at the end of the day, when it comes to me and Tyler, you can’t say we ain’t country.”

After earning their first GRAMMY nomination for “Meant to Be” in the Best Country Duo/Group Performance category ahead of the 61st GRAMMY Awards on February 10 (airing live at 8 p.m. ET / 5 p.m. PT on CBS), the entertainers continue to be celebrated, as Mayor Carolyn Goodman will declare today “Florida Georgia Line Day” in Las Vegas at City Hall.

Music editor for Nashville.com. Jerry Holthouse is a content writer, songwriter and a graphic designer. He owns and runs Holthouse Creative, a full service creative agency. He is an avid outdoorsman and a lover of everything music. You can contact him at JerryHolthouse@Nashville.com
Previous EmiSunshine Makes Guest Appearance In “The King”
Next Todd Snider Announces New Tour with Ryman Stop