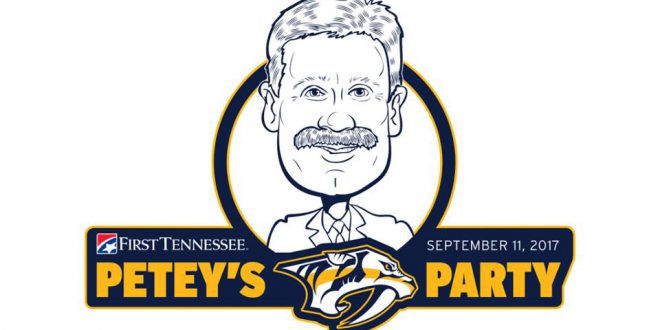 For the seventh consecutive year, the Nashville Predators Foundation and Peterson Foundation for Parkinson’s will host the First Tennessee Brent Peterson Golf Classic and First Tennessee Petey’s Preds Party to support the community work of both foundations. Held on Sept. 11 (Petey’s Party) and Sept. 12 (Golf Classic), the events are highlighted by interaction with Nashville Predators players and alum and celebrities from around sports and entertainment.
First Tennessee Petey’s Preds Party
6:00 – 9:30 p.m. at Bridgestone Arena (501 Broadway, Nashville, TN)
First Tennessee Brent Peterson Golf Classic
Tuesday, Sept 12
7:30 a.m. and 1:00 p.m. flights at Vanderbilt Legends Club (Legends Club Ln, Franklin, TN)
The two-day event commences at 6:00 p.m. Monday evening with the First Tennessee Petey’s Preds Party at Bridgestone Arena, a party that includes an elegant dinner buffet, dessert, soda, beer and wine. Entertaining the crowd will be comedian Nate Bargatze. In addition, the evening’s event will feature a world-class auction featuring one-of-a-kind experiences and premier autographed memorabilia from the sports and entertainment industry.
The next morning at Vanderbilt Legends Club, North Course will be the First Tennessee Brent Peterson Golf Classic. Foursomes in both the morning and afternoon waves at the Classic are paired with a celebrity golfer and treated to food and beverages on the course, in addition to an awards ceremony following each wave.
For more information, visit nashvillepredators.com/petey.
ABOUT PETERSON FOUNDATION FOR PARKINSON’S
The mission of Peterson Foundation for Parkinson’s is to educate and raise awareness of the devastating effects of Parkinson’s disease. Peterson Foundation for Parkinson’s raises funds to benefit Parkinson’s related research, education and support groups in the Middle Tennessee area, as well as internationally. For more information on the Peterson Foundation for Parkinson’s, visitpetersonforparkinsons.org.
ABOUT THE NASHVILLE PREDATORS FOUNDATION
The Nashville Predators recognize they play an important role in the community beyond what takes place on the ice. Established on August 18, 1998, the Predators Foundation strives to meet the educational, social, health and cultural needs of the community by offering unique resources and financial support to local youth-oriented organizations, awarding more than $5 million to the greater Nashville community. Between grants and other charitable donations, such as player ticket programs and fund-raising efforts, the Foundation donated over $1 million in cash to community organizations during the 2016-17 season. To learn more, visitwww.nashvillepredators.com/foundation.