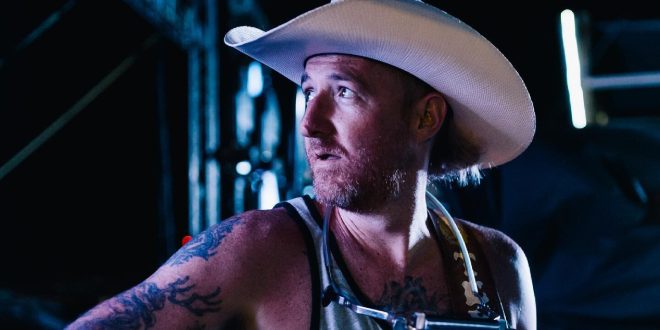 East Texas native Jonathan Terrell will be at the Farm this year and he’s one Nashville.com’s featured Bonnaroo artists. Freshly unique, with a sound somewhere between Bob Dylan and Willie Nelson, Terrell recently signed with Range Music. “I’ve had a career doing this for a long time, but I’ve always been on an independent streak,” Terrell explains with his signature Texas twang. “I’m ready for something new, and I think I have the material to take that next step.”

When he’s not touring with Midland the singer/songwriter is also a photographer, director, and a part time Honky Tonk/Disco DJ. He has quickly become one of the Austin’s fastest rising stars. In the early days, Terrell balanced his solo career with his work as frontman of local rock n roll band. Early records like 2008’s Trials & Stimulations and 2015’s Past the Lights of Town established him as a boozy street poet. He followed those records with his latest album, 2020’s Westward.

Music editor for Nashville.com. Jerry Holthouse is a content writer, songwriter and a graphic designer. He owns and runs Holthouse Creative, a full service creative agency. He is an avid outdoorsman and a lover of everything music. You can contact him at JerryHolthouse@Nashville.com
Previous WATCH: Chris Lane And Lauren Alaina’s “Dancin’ In The Moonlight”
Next Charlie McCoy And Don Schlitz Invited To Join The Opry