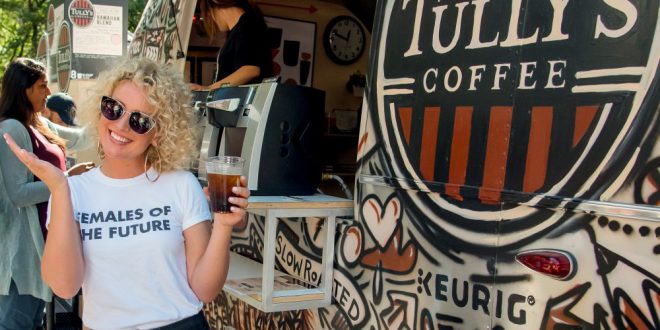 Thank you so much for chatting with us! You have partnered with Tully’s Coffee for the “ Slow and Low” tour and you had a special performance in Seattle. What has been a highlight for you partnering with Tully’s?
Besides all of the K-cup pods I can possibly drink, the coolest part is the process. It’s called the “slow and low” tour because it’s about the process of making coffee and how all of this care goes into every step of it. Tully’s brought in all kinds of different artists and has had everyone talking about their own crafts and our own process. The cool thing is for me, there’s definitely a lot to songwriting that makes it such a crazy process, but in Nashville, I feel like people have tried very hard to standardize it and make it very streamlined, and that doesn’t really work for me. For me, a song can take hours or days or weeks or months, it’s just whatever it takes to get it right. There’s some sort of weird drive that all these artists share and that Tully’s shares too in terms of wanting to make things perfect. Especially with my new album, I’ve spent a lot of time making sure it’s perfect and that it’s not redundant and making sure it’s relatable, special, and new. Overall, it’s been really cool to be around all of these people who share the same kind of process as me.

There are so many great varieties of Tully’s coffee like Tully’s® French Roast, Tully’s® Italian Roast, and Tully’s® Hawaiian Blend. Do you have a favorite?
Italian. I’ll drink the Hawaiian and the French too. I’m already a coffee snob enough, it just has to be good coffee. I don’t need somebody with a mustache pouring it though.

When you are not touring, what do you like to do for fun?
There’s not a lot of that time, but I would say anytime I can go out and be in nature, that usually helps me reset. It’s fun to go kayaking! I’m not a spectacular kayaker, but it usually involves beer and what not. I also just got married so my husband and I like to get up in the morning and drink our coffee and sit on the front porch in our little cracker barrel rocking chairs like an old couple and just chat.

What would Eight-year-old Cam say to you now about your life and career?
Eight-year-old Cam would probably say “wow, that’s so cool!” She would be so impressed with me because I’m traveling around, singing for people who are clapping at the end. She would also be like “wow, aren’t you tired?!”

I must say we also absolutely love your outfits. Where do you shop?
Eight-year-old Cam was not into fashion that’s for sure. The easiest go-to is ASOS. I feel like ASOS is so good at stuff. I never get to go into stores anymore, so I just order stuff online and pray to God it works out.

What else do you have coming up to end 2017 with a bang?
The biggest thing is putting out my single first and then going into the album stuff which is going to be huge! It’s going to be all kinds of wonderfulness and it’s coming up really soon. I can’t wait!

Now for a few food Questions:

From performing in front of thousands of fans, to daily interviews and signing autographs, what food and drinks help you keep up your energy?
Literally coffee. We have the Keurig on the bus and I just need to be caffeinated. It’s my drug of choice for sure! Some people love to have some sort of alcohol to chill themselves out, but that is just not the case for me. It never helps!

Do you prefer to cook at home or go out to eat?
I’m actually not a great cook, but I’m trying to get better at it. I think it just depends on what is in the fridge and how tired I am. If I can cook at home, then I would probably prefer that.

What are three things you can always find in your refrigerator?
Store brand sparkling water, Bio-K, which is a probiotic that keeps you from getting sick, and condiments!

Lightning Round: Ok, let’s talk about a few of your favorites in Nashville.
The most touristy thing you’ve done in Nashville? Roberts on Broadway!
Favorite place for music: The Ryman
Favorite Downtown Restaurant: I don’t have a favorite downtown restaurant but my favorite in East Nashville is Treehouse.
Best BBQ: Martins!

Finally, If you could eat or have a drink with one person dead or alive, who would it be and what would you have?
I’d probably have a glass of white wine with my Grandma. She passed and was one of my favorite people, so it would be good to see her again.

County singer Cam broke through in 2015 with “Burning House,” a subdued but smoldering ballad that defied modern notions of how women in Nashville could succeed. Untamed builds on that chemistry, blending earthy arrangements and firm, folksy sentiments into a style that sounds progressive without being too pop and traditional without being to retro. It’s an approach that turned artists like Shania Twain into titans in the ’90s, and as handy as Cam is with emotional anvils like “Mayday” or “Cold in California,” she’s just as good with songs like “Country Ain’t Never Been Pretty,” a crass-talking kiss-off anchored by the punch line, “If your head’s on straight, your hair will be fine.”