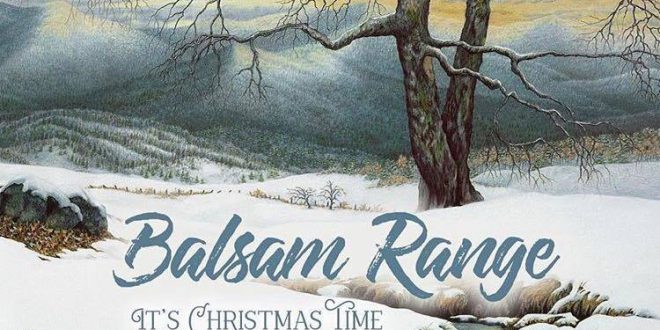 Almost 11 years as a band and 11 IBMA Awards, Congrats!! Why now record your first holiday album?

It’s something that we’ve always wanted to do, and this year we just decided to jump in!

How did you go about picking which songs to record?

We wanted to mix traditional favorites with some more obscure things. We wanted to put our sound and arrangement style to our old favorites, and allow the vocals to really shine.

You teamed up with the Nashville Recording Orchestra for the album, which sounds amazing, what was that like?

They’re incredible! Our arranger, Cody McVey, is an old friend of mine. He was the perfect man for this project. He is a highly sought after orchestra arranger, but he also understands and appreciates Bluegrass. He helped us achieve a great mix between Bluegrass and Orchestral music.

Any plans for after the Christmas album?

We are going to play the album live as part of our festival, The Balsam Range Art Of Music Festival. It will be on December 1st and 2nd in Lake Junaluska, NC.

Can you tell me a little about the album artwork?

We teamed with an artist that is highly respected , both locally and nationally. Her name is Teresa Pennington. The cover is from one of her colored-pencil drawings titled “Cold Mountain.” That would be the actual Cold Mountain from the movie. It is right here in Haywood County ( North Carolina).

Did you have any favorite classic Christmas albums growing up?

I have always loved the classic era of Christmas music. Sinatra, Mel Torme, Bing Crosby, and Nat King Cole, etc. We wanted to make an acoustic Christmas album that evoked that kind of nostalgic feeling.

We all have family Christmas traditions, but being a band for 10 years do members have any holiday traditions of their own?

As much as we travel, it’s all about family and just being home with them. We all have kids, so it’s the joy of just watching them through the exciting moments of the season. It’s a mountain area that we live in, so will be doing the country types of things. Hunting, being outdoors together. We are hoping for snow!

You have been making music since 2007 so I am curious to know if your reasons for making music have changed throughout the years?

Not really. We just started playing for the love of the music, and had no idea what would happen. We really strive to keep the music fun, and not let the business/travel side of things consume the joy of it.

Now that 2017 is almost over, what are some words you would use to describe the year? What have some of the highlights been?

It’s been a great year. We toured Europe, won Album of the Year, and played for thousands of our best friends!

When you aren’t recording and performing what do you like to do for fun? How do you unwind from everything?

My wife and I spend the majority of our down time watching our 9 year-old son play travel baseball. We also love to go to NC State football games, and MLB games. We are a sports family for sure. My son and I usually take a hunting trip. It’s always more about the adventure of it than the actual hunting aspect. It’s awesome just to get out in the woods and enjoy the quiet. All the guys in the band enjoy similar family interests.

ABOUT BALSAM RANGE
Balsam Range formed in 2007, has become one of the genre’s most award-winning acts in recent years, garnering 11 International Bluegrass Music Association Awards on the heels of six critically-acclaimed albums. The group has left audiences spellbound while headlining major festivals from coast to coast, selling out venues across the nation, and in multiple appearances at the Grand Ole Opry. Their previous outing, MOUNTAIN VOODOO, debuted at #4 on the Billboard Bluegrass Albums Chart and remained on that chart for 52 weeks. Three singles from the album reached #1 on the Bluegrass Today Chart, including “Blue Collar Dreams,” which spent three consecutive months at the top. The disc was recently honored as the IBMA’s 2017 Album of the Year.