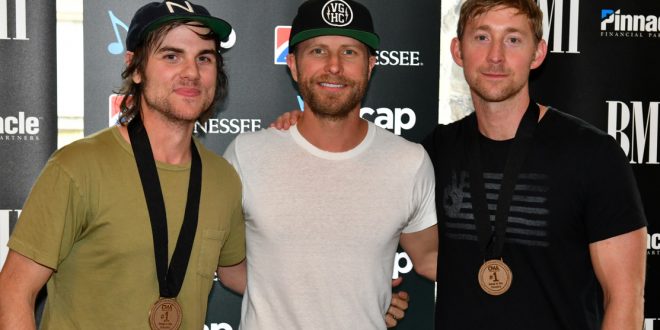 Multi-Platinum singer-songwriter Dierks Bentley celebrated his 16th career #1 as an artist and 13th #1 as a songwriter behind “Black” with industry friends and media alike, as they were treated to a chic party by performing rights organizations ASCAP and BMI hosted last Friday (6/22) at Nashville’s new restaurant Hemingway’s Bar & Hideaway. Serving as the third consecutive chart topper off Bentley’s critically acclaimed album BLACK (Capitol Records Nashville), the Gold-certified single and most personal song to date for Bentley was co-written alongside ASCAP songwriter Ashley Gorley, who celebrated his 33rd #1 song, and BMI songwriter Ross Copperman, who celebrated his 16th, and was produced by Copperman along with Arturo Buenahora. Both Copperman and Gorley were named Country Music Songwriter of the Year by their respective PROs in 2016.

​”Black” hit the top of the charts exactly one year after the release of Bentley’s “most fully-formed LP of his career” (TIME), and further illustrates Bentley’s depth and diversity as an artist as the smash hit follows the chart-topping Platinum-certified and award winning hits “Somewhere On A Beach” and “Different For Girls.” ​BLACK serves as one of only two Country albums released since last May that has been certified Gold while simultaneously spawning three certified songs by the RIAA. All three chart toppers released from the multi-nominated Album of the Year record have have seen more than 389 million digital streams.