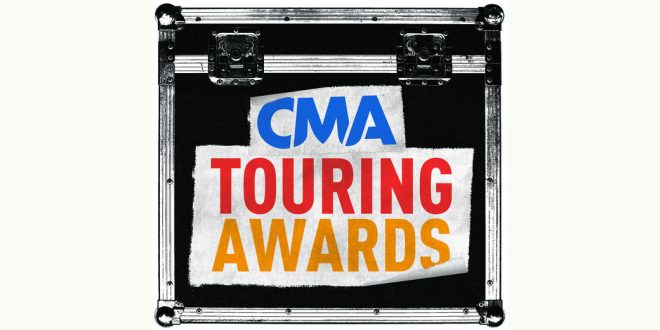 John Peets, founder of Q Prime South, presented Messina with the Lifetime Achievement Award, an honor given to an individual who has positively impacted and contributed to the growth of touring throughout a course of years that have proven to have an unprecedented historical impact on Country Music fans and the industry alike, and whose presence will have a long-term positive impact on Country Music and CMA for generations to come.

“This is quite an honor. I’ve been so blessed throughout my whole career,” said Messina. “I’m going to steal an Eric Church line because last year when everything came through, we did over 100 stadium shows. I had a record year. I’ve been doing this for 46 years, but last year was crazy. I’ve always been a dreamer. The first time I saw Elvis I knew this was what I wanted to do. I saw him when I was seven-years-old. My big reward is not only seeing my dreams come true, but the artists I work for, seeing their dreams come true. We help create magic night after night. It’s all about the artists, but it’s all about everybody in this room too because when you put us all together, that’s what magic is. When the artist and the audience connect and we’re just that part of it, that’s magical. I salute everybody in this room for being a part of what you all do. This is a night I’m never going to forget.”

Michael Ray made a surprise appearance to congratulate his publicist Ebie McFarland of Essential Broadcast Media with the Publicist of the Year Award. “Ebie, you’re a true visionary who’s worked with and represented so many great people in this industry and top entertainers,” said Ray. “You’re respected by your peers and on behalf of all of your clients and everybody at EBM we are all not only better at what we do because we have you in our corner but we’re better at who we are. Thank you for all that you do. We love you and congratulations.”

Mike Kennedy , drummer for George Strait, posthumously won the Touring Musician of the Year Award. His wife Margaret Kennedy; Terry Hale, bassist for Strait and founding member of Ace in the Hole Band; Mike Andersonand Marty Slayton, also members of Ace in the Hole Band, accepted the Award in his honor. Hale began, “I had the great privilege and measurable pleasure of standing next to Mike Kennedy every night on stage for 30 years. I’d like the thank his wife for sharing him with us.” He finished by recognizing everyone associated with Strait and the tour saying, “It’s not a right, it is indeed a privilege to be able to do this for a living. I think everybody out here knows that, and I thank Mike Kennedy for sharing this with me.”

After winning the Talent Buyer/Promoter of the Year Award, Brian O’Connell, Live Nation Nashville, gave a moving speech thanking everyone who accepted him to Nashville when he was starting out, especially the other nominees in this category that all contribute to the success of the touring industry. He concluded by bringing nominees Ali Harnell, AEG Presents, and Patrick McDill, Live Nation Nashville, plus Mike Dugan, Messina Touring Group, and David Kells, Bridgestone Arena, on stage to recognize each one individually for their accomplishments and passion for the industry.

Artists including Kenny Chesney, Eric Church, Little Big Town, Ronnie Milsap, Jake Owen, Blake Shelton, George Strait, Taylor Swift and Keith Urban recorded personal video messages that played throughout the evening to congratulate winners. Prior to the nominees in each category being announced, comical videos were played, with voiceover by Niemann and Joe Denim, highlighting the “Real Crews of Genius” being honored at the 2018 CMA Touring Awards.

The 2018 CMA Touring Awards winners are as follows:

Music editor for Nashville.com. Jerry Holthouse is a content writer, songwriter and a graphic designer. He owns and runs Holthouse Creative, a full service creative agency. He is an avid outdoorsman and a lover of everything music. You can contact him at JerryHolthouse@Nashville.com
Previous Jimmie Allen’s New Single Most Added At Country Radio
Next Don McLean Reflects On The Tragic Inspiration Behind “American Pie”