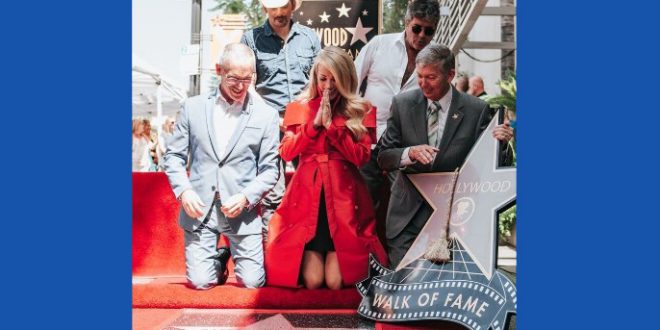 Carrie Underwood Gets Star on Hollywood Walk of Fame

Seven-time Grammy Award-winning singer Carrie Underwood was honored with the 2,646th star on the Hollywood Walk of Fame on Thursday, September 20, 2018, by the Hollywood Chamber of Commerce. The star is dedicated in the category of Recording at 1750 N. Vine Street in front of the historic Capitol Records Building.

Emcee Leron Gubler, President & CEO of the Hollywood Chamber of Commerce, unveiled the star with Simon Cowell, who was a judge when Underwood won the 4th season of American Idol, and Brad Paisley, with whom Underwood will co-host the CMA Awards for the 11th consecutive year in November.

In Spring 2019, Carrie will launch The Cry Pretty Tour 360, which will kick off in May and will play 55 arenas across the U.S. and Canada.

Music editor for Nashville.com. Jerry Holthouse is a content writer, songwriter and a graphic designer. He owns and runs Holthouse Creative, a full service creative agency. He is an avid outdoorsman and a lover of everything music. You can contact him at JerryHolthouse@Nashville.com
Previous Carlene Carter Set For Bluebird Residency
Next Americanafest Panels Dole Out A Wealth Of Valuable Information