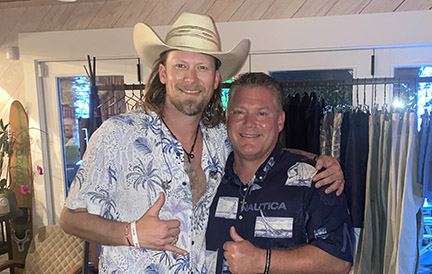 Brian Kelley topped off his fifth consecutive sold-out Surf Post Sessions show with a proud salute to local veteran Michael Monk. Welcoming him and his family to the special locals-only event (7/17), Kelley dedicated his performance of “American Spirit” to Monk, and personally thanked him onstage for his 12 years of service as part of the Army National Guard. Specializing in AIT, Monk served in Iraq as a combat engineering lieutenant where he further helped build refugee camps. Watch the inspiring moment here.

“It was so special to have Michael [Monk] and his family join us. I felt honored to be able to dedicate ‘American Spirit’ to him and thank him for his 12 years of service,” shares Kelley. “You can look one time in Michael’s eyes and know he means what he says, and that nothing will ever shake what he stands for. He’s a great man, and I look forward to getting to know him more!”

Wholly embracing his Florida community, Kelley hosted this headline run – sponsored by local veteran-owned small business 30A Blaze – live from the backyard of the Tribe Kelley Surf Post. Named among Southern Living’s 15 Best Things To Do in Grayton Beach, Florida list, the Tribe Kelley Surf Post is run by Kelley and his wife Brittney, and is fully stocked with the brand. He also recently released an anthemic homage to his hometown with footage from the annual Grayton Beach Parade on Independence Day as the official “American Spirit” music video, directed by Ben Christensen. Watch as the freedom-flying clips bring to life the tried-and-true lyrics of Kelley’s first solo release for Big Machine Records. He produced the track alongside Jake Rose, also both serving as co-writers with Blake Redferrin and Canaan Smith.

Music editor for Nashville.com. Jerry Holthouse is a content writer, songwriter and a graphic designer. He owns and runs Holthouse Creative, a full service creative agency. He is an avid outdoorsman and a lover of everything music. You can contact him at JerryHolthouse@Nashville.com
Previous Kris Kristofferson To Release Live At Gilley’s
Next CMA Foundation Hires Franklin Willis As Community Impact Director