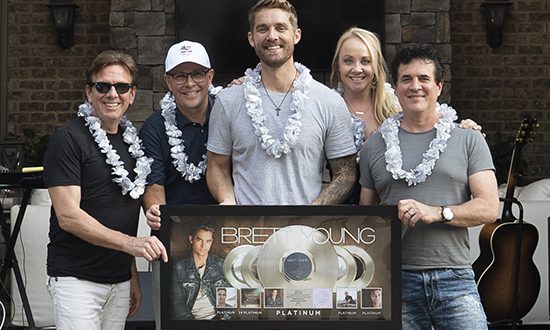 ACM New Male Vocalist of the Year Brett Young celebrated his ongoing Platinum success with friends, family and industry supporters including BMLG President and CEO Scott Borchetta and BMLG Records President Jimmy Harnen last night just outside of Nashville. The hitmaker added his debut self-titled album and Top 5-and-rising single “Mercy” to a bolstering list of accolades, both crossing the 1 million mark in total consumption. The Platinum milestones follow Young’s first three singles: “Sleep Without You” (Platinum), “In Case You Didn’t Know” (3X Platinum) and “Like I Loved You” (Platinum). Brett performed the compelling tunes and offered a surprise preview of the first single off his upcoming sophomore album, “Here Tonight,” for his special guests.

“It was surreal being back where I first signed my record deal and seeing how much has happened since then,” Young said. “It’s crazy to think just three years ago I was in the same place just getting started with my team. I wrote this album from such a vulnerable and honest place, so it means the world that these songs have connected with people the way they have. The time has flown by, and I can’t wait to share the new music with fans soon.”

Music editor for Nashville.com. Jerry Holthouse is a content writer, songwriter and a graphic designer. He owns and runs Holthouse Creative, a full service creative agency. He is an avid outdoorsman and a lover of everything music. You can contact him at JerryHolthouse@Nashville.com
Previous Kenny Chesney Number One For A Second Week
Next Pilgrimage Announces Two Day Lineup