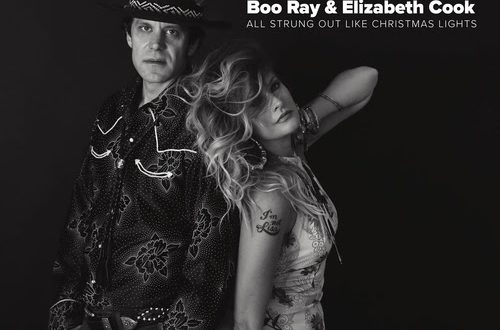 LISTEN TO ”ALL STRUNG OUT LIKE CHRISTMAS LIGHTS” : HERE
“ … the track was co-written by the two left-leaning singers, who swap harmonies over a boozy bedrock of electric guitar, pedal steel and barroom piano.”
– Rolling Stone Country
Nashville’s Boo Ray is kicking off the Holiday Season with the release of “All Strung Out Like Christmas Lights,” a duet with Elizabeth Cook. This  the first in a series of vinyl duet releases Boo Ray is putting out through his partnership with Kindercore Vinyl.
Ray is a long time fan and admirer of Cook’s so the song had to be just right.  “Elizabeth is inspiring, entertaining, self effacing and clever as hell,”  says Ray. “That Texas shuffle is a cool vehicle for the kind of good-natured cuttin’ up and carrying on that Elizabeth and I have in common.”
The limited edition colored vinyl is is available in select record stores and from Ray’s website.   Side A features “All Strung Out LIke Christmas Lights” and Side B features Boo Ray’s “I’ve Got the Jug.”
Ray had the privilege of christening the Athens, GA based pressing plant Kindercore Vinyl with the vinyl release of his critically albumSea of Lights this fall.  Produced by Noah Shain (Dead Sara, Escondido, Nikki Lane) the album was  recorded Shain’s White Buffalo studios in Los Angeles backed by an all star band that included Steve Ferrone on drums (Tom Petty & the Heartbreakers), Paul Ill on bass (Christina Aguilera, P!nk, Hole etc.), Sol Philcox-Littlefield (Jim Lauderdale, Jake Owen, Aaron Lewis) on guitar, Dallas Kruse (Justin Grennan, Skylar Stonestreet) on Hammond B3, Smith Curry (Willie Nelson, Kris Kristofferson, Billy Gibbons, Kid Rock) on pedal steel, and twin brothers Todd and Troy Gardner (Lenny Kravitz) on backup vocals. The all-star line up recorded 10 songs in two days live to tape, using the  same 2inch tape machine used to record Bob Dylan’s Nashville Skyline and several of Johnny Cash’s nashville albums.
Ray will be continuing the partnership with Kindercore Vinyl with more in the series of 7inch duets coming next year. The Kindercore research and development team have taken active steps toward renewable PVC replacements, seeking to be the first pressing plant to offer petroleum free phonograph records in the coming years. By Boo Ray being the first artist to work with Kindercore he is hoping to set an example, that taking steps towards preserving the planet, can be an simple as working with forward thinking companies like Kindercore.  If enough artists follow Boo’s lead collectively they can make a huge impact on making the industry more sustainable.
To celebrate the Holiday vinyl release Ray will be supporting Stoney Larue at 3rd and Lindsley Saturday November 18th. More details on the show can be found HERE.