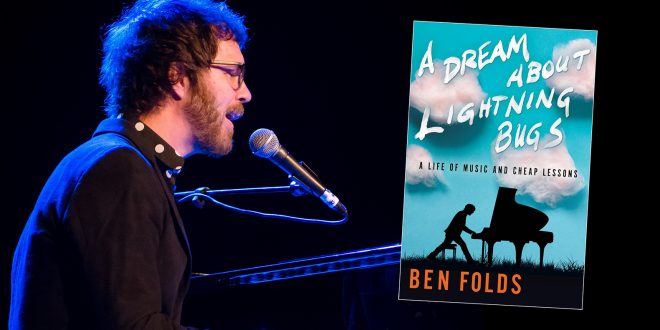 Ben Folds is known for his musical genius and spontaneous creativity – composing a song with the National Symphony Orchestra live (watch above), collaborating with the likes of Sara Bareilles, Regina Spektor and William Shatner, serving as a judge for five seasons on NBC’s acclaimed a capella show The Sing-Off, being named the first-ever artistic advisor to the National Symphony Orchestra at the Kennedy Center, being an outspoken champion for arts education and music therapy. It’s not been an easy road to get to where he is today, but the ups and downs are what Folds insists are essential for any artist.

Now, Folds looks back at his life so far in a charming and wise chronicle of his artistic coming-of-age, infused with the wry observations of a natural storyteller. In his first book A Dream About Lightning Bugs, he opens up about finding his voice as a musician, becoming a rock anti-hero, and hauling a baby grand piano on and off stage for every performance.

A native of North Carolina, Folds writes that as an infant his cradle was a cardboard box, while his family’s mode of transportation was a doorless convertible jeep, where a 4-month-old Ben would sit in catapult position. He discovered his love of the piano in second grade, and from there we follow his journey to becoming the musician he wanted to be.

Along the way there are great lessons – supportive music teachers pushing him, dropping out of college to start a real band (*drums were thrown into a lake at the University of Miami*). He puts it all out there, writing about the bad – a botched SNL performance where he couldn’t even enjoy hanging out with Samuel L. Jackson at the after party; and the good – he and two other young men eventually forming Ben Folds Five. He paid his dues (*his polka career never quite took off*), while never giving up on his dream. A Dream About Lightning Bugs is as humorous as it is poignant, as observant/revelatory as it is compulsively readable.

Folds hits the road starting in late July for a cross country concert tour, featuring his book at every performance, as well as holding stand-alone book events along the way. You can catch him at Parnassus Books on August 9th in Nashville.

What you might not know about Ben Folds:
He is serving as Chairman of ArtsVote 2020 — a major initiative of the Arts Action Fund and Americans For The Arts (the nation’s largest grass roots arts advocacy organization with 400K+ members) to ensure that arts policy is a part of the political dialogue in the 2020 presidential and congressional races.
He is serving as the first-ever Artistic Advisor to the National Symphony Orchestra at the Kennedy Center where he curates special performances.
He is hosting a podcast series of interviews with the 2020 presidential candidates focusing on their positions regarding arts funding for our public schools and communities.
He will be attending both political party conventions in 2020 to present a policy paper on the arts (he was the only artist to speak and perform at both conventions in 2016).
He once teamed up with renowned Broadway composers, playwrights, directors, choreographers and actors to create and perform a musical in less than 24 hours.
He once sparked an international grassroots campaign that saved the historic, iconic Studio A in Nashville from demolition.
He performed in the first ever live webcast on MySpace.
He once leaked on the internet an entire fake version of his album Way To Normal before the real album was officially released.
He is also an accomplished photographer whose work has been featured by National Geographic, in gallery showcases in Europe and Australia, and the focus of a documentary by the Kennedy Center.
He is the co-creator with Fred Rogers Productions of a new film/TV series currently in development that teaches kids about the building blocks of music.

Music editor for Nashville.com. Jerry Holthouse is a content writer, songwriter and a graphic designer. He owns and runs Holthouse Creative, a full service creative agency. He is an avid outdoorsman and a lover of everything music. You can contact him at JerryHolthouse@Nashville.com
Previous Kenny Chesney Publishing 456-Page Coffee Table Book For No Shoes Nation
Next Thomas Rhett Releases Second Single From “Center Point Road”