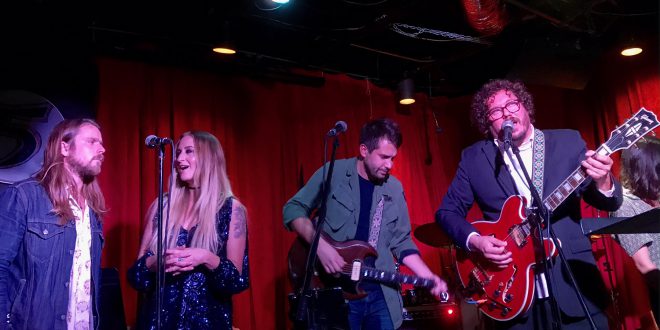 Americanafest Still The Best Bang For Your Music Festival Buck

The 18th annual Americanafest has wrapped up another year. The secret is out that this is the most bang for your musical dollar around. Thousands of fans, artists and industry professionals from all over the world converged on Nashville to enjoy 230 + performances at over 40 venues as well as the panels and seminars at the conference. There is a dizzying array of options for the music lover with serious musicianship on display across town.

On Tuesday we caught the Robert’s Western World Americana honors and Awards post party led by omnipresent Jerry Pentecost who had just played in the house band at the Awards ceremony at the Ryman. Guests included former Br-549 front man Chuck Mead and the soon to be a star British singer songwriter, Yola Carter.

Van Morrison did not disappoint with his show Thursday night at Ascend Amphitheatre. We have seen Van a few times now and he was in the best spirits we have seen him in as he blasted through a bunch of hits with a couple rarities thrown in. Some fans surely had favorites they would have liked to have heard, but Morrison played songs that were representative of his extensive catalog starting with his days with Them.

Friday started with a smoking hot set from Tyler Childer’s blasting through tunes from his recent Sturgill Simpson produced release, Purgatory. The rest of the evening was spent at the Station Inn. Most were there early to ensure a spot to catch Emerging Artist of the Year, Amanda Shires, but left fans of Nashville’s the Barefoot Movement. The group mixed traditional bluegrass sounding tunes with rock favorites Crazy Train and Wouldn’t it be nice. Shires was up next with her band and put on a great show. She was followed by Luke Bulla with a band of bluegrass all stars that included Casey Campbell on Mandolin and Cody Kilby on flattop guitar. We closed out the evening with Punch Brother and banjo virtuoso Noam Pikelny.

On Saturday we hit the Café Rooster Party at Little Harpeth Brewing which highlighted the labels stable of great artist with a guest appearance by Aaron Lee Tasjan. Recent signee Rayvon Pettis, familiar to many in Nashville, impressed with his playing and songwriting chops and undoubtedly gained some new fans. Darrin Bradbury also did not disappoint with his quirky folk tunes.

Saturday night we camped out in the balcony at 3rd and Lindsley for Elizabeth Cook and Jack Ingram. Cook assembled a crack band which included Steelism’s Jeremy Fetzer and Spencer Cullum Jr. She played a bunch of new songs which were well received by the packed house. Jack Ingram rocked like we have never seen him only bringing out the acoustic guitar for one song. He was a great way to conclude our week at one of the best festivals around.