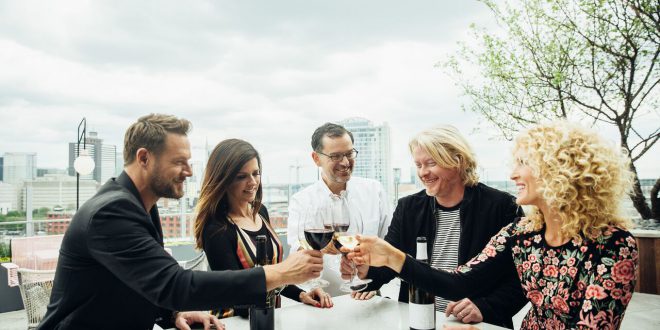 For Grammy Award-winning Little Big Town, life is about the journey and the people they meet along the way. Today, the four members of the band – Karen Fairchild, Phillip Sweet, Kimberly Schlapman and Jimi Westbrook – are launching their own wine, 4 Cellars, as a tribute to family, friends and fans with Washington state’s Browne Family Vineyards and its Proprietor Andrew Browne. This wine will be available exclusively online and served in select Tennessee restaurants beginning June 1.

4 Cellars is available by signing up as an exclusive wine club member online at www.fourcellars.com. In each of the quarterly shipments, 4 Cellars Club and VIP members will receive bottles of 4 Cellars wine and exclusive merchandise curated by the band. Memberships range between $100-200 per quarterly shipment.

The band’s members and Browne were introduced through mutual friends during their travels through Washington’s wine country. While visiting the historic town of Walla Walla, they tasted Browne Family Vineyards’ wines and were impressed by their quality, history of critical acclaim and Browne’s family story. As a country music lover, Browne was thrilled to meet Little Big Town and they clicked immediately, sharing their passion for quality, hand-crafted wines with family and friends. “The beauty of this collaboration is that like music, this project is another extension of our creativity. This is the first collaboration outside of the band that the four of us have worked on together, and it’s a natural extension of what we hold dear-relaxing and celebrating with good friends, coming together and breaking bread, and fellowship,” said Karen Fairchild.

After meeting Browne, the members of Little Big Town decided to collaborate on creating the perfect companion to music: wines to share with family, friends and their fans.

“Washington’s Walla Walla Valley is an acclaimed wine region, and at Browne Family Vineyards, we pride ourselves in creating great wines that tell a story from each vintage and providing wine drinkers the opportunity to experience them,” Browne said. “After sharing our common love for the story wines tell, I was humbled to work with Karen, Phillip, Kimberly and Jimi to bring 4 Cellars to life. It is exciting to create something entirely new – something that draws from their experiences and life’s work, which they can share together and with the people that mean most to them.”

“Much like music, wine takes you to a place and a time,” singer and guitarist Phillip Sweet said. “It evokes emotion and both elicits and creates memory with those you are sharing it with.”

4 Cellars – Life is about the journey and the people that you meet along the way. 4 Cellars is a new wine collaboration between the members of Grammy Award-winning group, Little Big Town, and Walla Walla-based winery, Browne Family Vineyards. For Little Big Town, wine has always been a part of their story. Whether it is in the studio or on the road, shared with family or friends, the story unfolds much like that of a great wine. Visit www.fourcellars.com or follow us @fourcellars.

Little Big Town – Grammy Award-winning group, Little Big Town – consisting of members Karen Fairchild, Phillip Sweet, Kimberly Schlapman and Jimi Westbrook – first entered the music scene more than 18 years ago with hits such as “Boondocks,” “Bring It On Home,” “Good As Gone” and the Grammy-nominated single “Little White Church.” With albums Tornado and Pain Killer, they have seen massive success with #1 singles “Pontoon,” “Tornado,” “Day Drinking,” and most recently the history-making, best-selling country single of 2015, “Girl Crush,” and the recent two-week #1 single, “Better Man.” Little Big Town has earned almost 40 award show nominations and in the past five years has taken home nearly 20 awards, including multiple Grammy, CMA and ACM awards, and an Emmy award. They are the reigning ACM and CMA Vocal Group of the Year and at the 2016 Grammy Awards won “Best Country Group/Duo Performance,” and “Girl Crush” as well as “Best Country Song.” Released February 24, 2017, Little Big Town’s seventh studio album, The Breaker debuted #1 on the Billboard Country Charts and Top 10 (No.4) on the Billboard 200, marking the group’s fourth Top 10 debut on the Billboard 200 chart. Their single, “Happy People,” is currently at country radio. Little Big Town recently launched its history-making year-long artist residency at the famed Ryman Auditorium in Nashville- marking the venues first-ever year-long residency in its 125-year history. For tickets and more information on “Little Big Town At The Mother Church,” visit LittleBigTown.com or follow them @littlebigtown.

Browne Family Vineyards – Is a family-inspired dream to make outstanding wine, realized through Washington’s heritage vineyards. Inspired by the greatness of one man— owner, Andrew Browne’s Grandfather, William Bitner Browne – integrity and excellence are the standards upon which Browne wines are created. Browne Family is premium Washington wine, 15 years in the making before its first vintage debuted, made with the utmost quality and enjoyment in mind. Vineyards, winemakers and cellar masters committed to world-class wine production were carefully and deliberately selected to represent the best of the Columbia Valley AVA. The Browne Family team takes a careful commitment for uncompromised quality, assuring cellar-worthy vintages that stand the test of time. Visit www.brownefamilyvineyards.com or follow on them on Facebook and Instagram @brownefamilyvineyards.