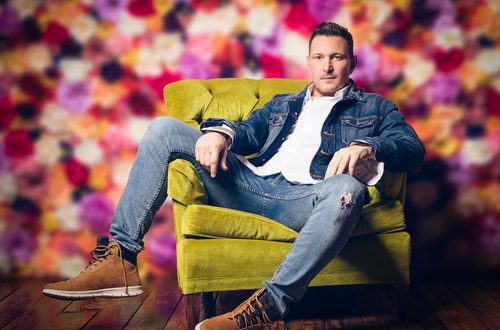 Today, Grammy-nominated country singer/songwriter Ty Herndon has shared a new video for the song “I Can’t Make You Love Me.” Originally performed by Bonnie Raitt, the song was featured on Herndon’s recently released album Got It Covered.

“The first time I heard this song I had just ended a relationship” writes Herndon. “I was driving in my truck from Dallas to Nashville. I ended up on the side of the road crying my eyes out. As much as it hurt I knew there was healing in this music. I would think many people pulled over to the side of the road just like I did. Today I hear this song and I know it is absolutely about letting go and letting God in. For me this song is what music is all about.”

“I Can’t Make You Love Me” follows the release of Herndon’s video for “So Small” which features the youth of The Rainbow Squad, a Nashville-based group focused on providing a safe space and community resources for LGBTQ+ kids.

Earlier this summer, Herndon released a landmark re-recording of his 1995 single “What Mattered Most” with the pronouns reversed from the original to reflect Ty’s true self that fans have come to know since he came out in 2014.

In November of 2014, Ty Herndon was the first major male country artist to publicly come out as gay. Shortly after, he made history when he hosted the first-of-its-kind country music event, titled The Concert for Love and Acceptance. The event, designed to bring attention and support to at-risk youth and acceptance, received national attention from Boston Globe, Rolling Stone, Entertainment Tonight, and more. Herndon received an outpouring of support that only strengthened his relationship with fans. Since the launch of the event, Herndon has partnered with GLAAD to produce the event each year.

Using his celebrity influence for the better good, GLAAD announced that a grant, named after Herndon, was being offered to support young people for their commitment to enhancing LGBTQ inclusion and representation in music. The recipient of the Ty Herndon Rising Stars Grant receives $2,500 to further fund their work and initiatives. A philanthropist at heart, Herndon has also donated his time to organizations such as the Trevor Project, Make A Wish, St. Jude, GLAAD, HRC and Feed the Children.

One of his most recent acts of giving was lending his vocals on the tribute track, “ Hands.” The single, released through Interscope Records in conjunction with GLAAD, is a musical tribute to the victims of the recent shooting at the Pulse nightclub in Orlando, Florida. Herndon was among a star-studded list of artists, including Mary J. Blige, Jason Derulo, Selena Gomez, Imagine Dragons, Jennifer Lopez, Kacey Musgraves, P!nk, RuPaul, Britney Spears, Gwen Stefani, Meghan Trainor and more, voicing support for the LGBT community in the original song. Proceeds from the track benefit Equality Florida Pulse Victims Fund, the LGBT Community Center of Central Florida, and GLAAD.

Music editor for Nashville.com. Jerry Holthouse is a content writer, songwriter and a graphic designer. He owns and runs Holthouse Creative, a full service creative agency. He is an avid outdoorsman and a lover of everything music. You can contact him at JerryHolthouse@Nashville.com
Previous Madison Kozak To Make Her Opry Debut
Next Complete List Of 2019 Dove Award Winners