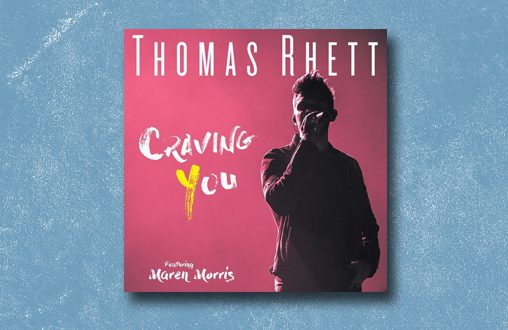 ACM Awards Male Vocalist of the Year Thomas Rhett’s “bold” (GQ) single “Craving You” feat. Maren Morris hit No. One today on both the Billboard Country Airplay and Mediabase charts, sky-rocketing to the top in just 15 weeks as the fastest-rising song of his career so far. The single marks Thomas Rhett’s second No. One this year and the eighth of his career. “Craving You” is the lead single from Thomas Rhett’s highly-anticipated upcoming third release, due out later this year.

“I heard this song went No. one this morning while I was on vacation with my family,” said Thomas Rhett. “It just reminded me how everything about this song has been fun. From having Maren sing on it, to making a really rad video to just feeling the energy from the fans each night when we play it live. It’s an unbelievable way to start out this record…I really can’t wait to share more.”

After drawing capacity crowds overseas last year, he returns as a “force to be reckoned with” with plans to return to Europe while also making his debut headlining run in Canada in addition to US dates. For more information on new music and for a full list of upcoming tour dates, visit www.thomasrhett.com.