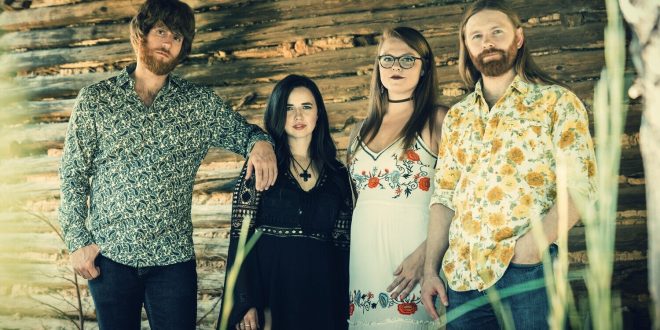 We got a tip that we needed to check out The Barefoot Movement and boy are we glad that we did. We went to their Station Inn show last Wednesday and Bluegrass definitely has a rising star. And yes they actually were barefoot. The foursome performed every song from their new EP, “Rise and Fly” and many more including a cover of Steely Dan’s “Any Major Dude” which was amazing. Their energy and tight harmonies made the show go way too quickly and it was over before we knew it. When choosing the name of the EP, the band went with the inspiration “Rise and Fly,” a line that is repeated throughout their lead single “Early In The Morning” (watch above) which “captured very simply the theme of the whole project,” says The Barefoot Movement’s Noah Wall.

The band formed about seven years ago and has two full length albums, an EP of traditional music, several cross-country tours, and appearances at some of the top bluegrass festivals in the United States already under their belt. Fiddler Noah Wall, of Oxford, NC. met mandolinist Tommy Norris their senior year of high school. They continued to build the band from the ground up throughout their college careers. While Tommy studied classical music and recording engineering at Western Carolina University, Noah chose East Tennessee State, particularly for their Bluegrass, Old-time and Country Music Program. Here she began to shape her musical identity, under the tutelage of ETSU’s renown staff, and found an instrumental home in old time fiddling. With the addition of versatile guitarist and singer Alex Conerly of Hattiesburg, MS in 2013, and most recently, Katie Blomarz of Frankfort, IL on the upright bass, the lineup was complete with all the elements that make up the Barefoot sound: lush harmonies, thoughtful instrumentation, and memorable melodies.

Fans can join the Movement and hear what all the hype is about by downloading and streaming the new project HERE.
–Jerry Holthouse

Music editor for Nashville.com. Jerry Holthouse is a content writer, songwriter and a graphic designer. He owns and runs Holthouse Creative, a full service creative agency. He is an avid outdoorsman and a lover of everything music. You can contact him at JerryHolthouse@Nashville.com
Previous Lainey Wilson To Make Grand Ole Opry Debut
Next Steve Miller Will “Fly Like An Eagle” At The Ascend