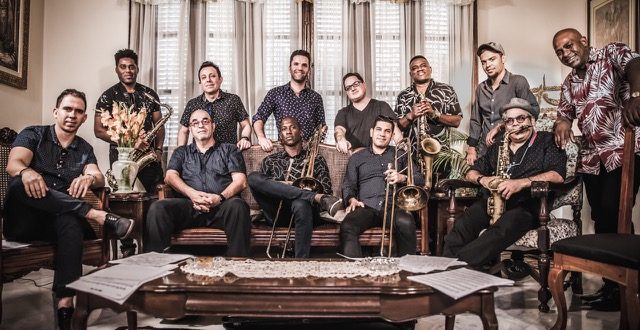 Critically-acclaimed as one of the best albums of 2018, Orquesta Akokán’s self-titled debut release for the venerable soul label Daptone Records — the label’s first Spanish language album — is a transformative and modern mambo recording that exquisitely captures the spirit of pre-revolutionary Cuba by today’s foremost Cuban musicians. The powerhouse big band collective returns to the United States for its biggest tour to date, following its recent sets at NYC’s globalFEST and a headlining performance at The Kennedy Center in Washington, DC. In June & July 2019, Orquesta Akokán gets audiences up on their feet for raucous dance parties at a series of venerable venues throughout the West Coast, Southwest, the Rockies, the South, and East Coast. A list of all forthcoming Orquesta Akokán tour dates is below.Hailing straight out of Havana, Cuba, Orquesta Akokán is a fierce orchestra of deeply soulful mambo reminiscent of Benny Moré, Pérez Prado, and La Banda Gigante of the 1940’s and 1950’s. Orquesta Akokán boasts an all-original lineup of compositions recorded at the historic state-run Estudios Areito with a multi-generational cast of Cuba’s finest players. The album is led by the inimitable singer José “Pepito” Gómez with incendiary arrangements by Michael Eckroth, and it was produced by Chulo Records’ Jacob Plasse. The ferocious wind and rhythm sections of Orquesta Akokán consist of musicians from storied groups including Irakere, NG La Banda, and Los Van Van. Robust, time-tested musical architectures of son cubano and mambo are honored and contemporized through a synthesis of the rich compositional styles of Havana, New York, and beyond.

Music editor for Nashville.com. Jerry Holthouse is a content writer, songwriter and a graphic designer. He owns and runs Holthouse Creative, a full service creative agency. He is an avid outdoorsman and a lover of everything music. You can contact him at JerryHolthouse@Nashville.com
Previous Reflections Of Don Williams At The Schermerhorn
Next Nashville Boogie Vintage Weekender May 23–26