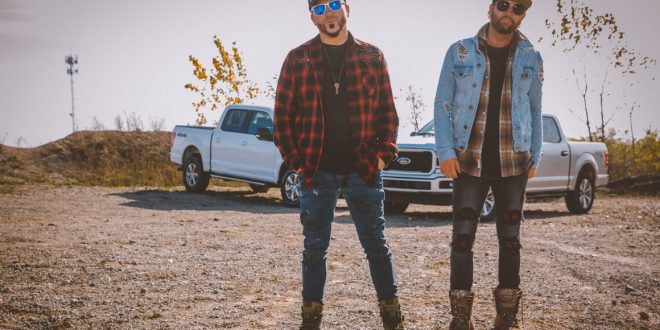 Hard-working Country duo LOCASH are continuing their meteoric ascent with high-profile spots at the CMA Awards and more.
On November 8, the rising stars – hitmakers Chris Lucas and Preston Brust – take the podium as hosts of “The 51st Annual CMA Awards” pre-telecast special. Then later that evening, the unstoppable pair will enjoy their first CMA Awards as nominees, up for the coveted Vocal Duo of the Year award. The CMA Awards broadcast live on ABC at 8 p.m. ET.
Meanwhile, the pair are firing on all cylinders after renewing their Ford dealer advertising campaign for a second year alongside Comcast Spotlight. LOCASH recently filmed a commercial for the televised ad campaign that will air across the country, with more details coming soon.
And just last weekend (10/27), Lucas and Brust showed their true charitable colors by teaming with Southern Illinois’ New Country Z100 radio station to raise an astonishing $64,000 for St. Jude Children’s Research Hospital with their seventh annual “Evening With LOCASH” benefit concert. Yesterday (11/1) the pair performed a private show in Las Vegas to thank the community’s first responders.
All this news follows the undeniable success of LOCASH’s Reviver Records debut, THE FIGHTERS, which produced the GOLD-certified hit, “I Love This Life,” and their first #1 smash, “I Know Somebody.” The album’s third single kept them in the spotlight, as the flirty romance of “Ring on Every Finger” cracked the Country Aircheck/Mediabase Top 15, while also pulling in more than 9.7 million Spotify streams and 3 million views on Vevo.
The duo would like to thank Country radio for their incredible support, and reveal plans for a whole new batch of music on the horizon. Their next single “Don’t Get Better Than That” is coming soon, along with another full album of heartfelt, fun-loving modern Country.
LOCASH recently rocked massive crowds on Tim McGraw and Faith Hill’s SOUL2SOUL TOUR, and are now set to close out 2017 strong with concerts dates from Troy, NY (November 30), to Las Vegas, NV (December 10 and 11 during the National Finals Rodeo). Their final run of the year will also include three Grand Ole Opry shows at Nashville’s famous Ryman Auditorium, taking place November 3, November 18 and December 16.
ABOUT LOCASH:
LOCASH is a Country music duo made up of singer-songwriters Chris Lucas and Preston Brust, natives of Baltimore, Maryland, and Indianapolis, Indiana, respectively. With a sound that fuses modern Country and classic heartland Rock with an edgy vocal blend, the independently-minded partners are revered as “one of Nashville’s hardest-working acts” (Rolling Stone) whose live show “has consistently been among the most energetic and entertaining in the country music genre” (Billboard). With two albums and eight charting singles to their credit, LOCASH broke out in 2015 with their gracious GOLD-certified hit, “I Love This Life,” and followed up in 2016 with the flirtatious #1 smash, “I Know Somebody” – their first trip to the top of the Country radio airplay charts. Both singles were part of their Reviver Records album debut, THE FIGHTERS, which was released in the summer of 2016 to Top 15 success. Their next single, the fun-loving romantic anthem “Ring on Every Finger,” was co-written by Thomas Rhett, Jesse Frasure, and Josh Kear, and also rose into Country radio’s Top 15. As songwriters, Lucas and Brust have scored two undeniable hits (Keith Urban’s #1 “You Gonna Fly” in 2011 and Tim McGraw’s PLATINUM-certified “Truck Yeah” in 2012). In 2017, they earned their first round of awards show recognition, nominated at the ACM Awards for New Vocal Duo or Group of the Year, the CMT Music Awards for Duo Video of the Year (“I Know Somebody”), and the upcoming CMA Awards for Vocal Duo of the Year.
ShareTweet