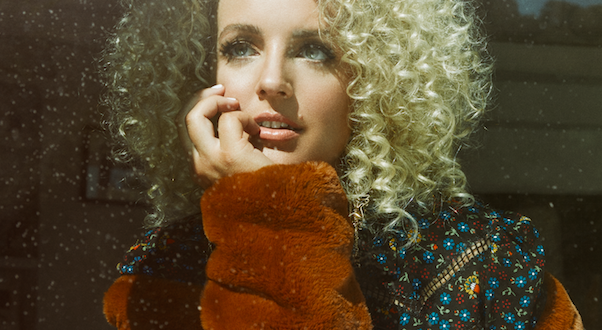 Ok, let’s first talk about a few of your favorites in Nashville!
Place to take someone visiting from out of town: Leipers Fork
Favorite place to go on date night? Treehouse
Burger: Jack Brown’s Diner
Tacos: Taco Mamacita
Japanese: Two Ten Jack
Place for Wine: Husk
Is there a place you haven’t ate you have been dying to go? City House

“Untamed” was released in 2015 and and you just released “Diane” the lead single off your sophomore album. What has changed in your life between then and now.. Is there a big difference in writing.

I got married, so on the album you will hear sweet, newly-wed, romantic songs. But it’s not the whole album, because then you have songs like “Diane.” But I will say what has really changed is that I have grown and gotten better. My writing and my voice have both gotten stronger and better. Now we are at a level that the budget is better, the co-writers are better and I have gotten a little bit more into the scene. It is so much more evolved, makes me really proud of it.

Did you go to concerts growing up and can you remember your first concert?

My first concert was a Beach Boys concert being from California. The first concert that I chose to attend was probably the Backstreet Boys.

You are also quite the songwriter, what do you do for inspiration when you sit down to write a song and it seems that nothing is coming to you?

This is something that we talk about a lot with my fellow songwriters and creators. Sometimes you will sit down to work and inspiration doesn’t show up, and you still need to follow through and finish and be good at the motions that makes a song come out. Then when the inspiration does come, you will be better at the muscles of it.

You are such an inspiration and role model to all girls of all ages. How does that feel and do you have any advice that you were maybe given that you would like to pass on?

It feel surreal. Even when you are at a point where you can say things like “I was nominated for a Grammy” or “my single went platinum” you still doubt yourself and have moments when you look in the mirror and think I hate myself, I hate my body. Everyone does that, especially women. So the thing that I would just love to say to girls is you don’t have to say you’ll be happy when or you will be happy if, those are all things that are not solved with success, money, fame. And not to be a downer, you will have a great time when you get there, work hard, but your satisfaction and happiness with yourself is there now.

What is one Thanksgiving tradition you have?

We do the sweet potato pie with marshmallow on top. I do not know who invented that, but thank you.

Are you a turkey or ham eater?

What is your favorite Thanksgiving dessert?

I like crunchy things, so I would probably say pecan pie.

How soon is too soon to start decorating for Christmas?

I think just so you avoid the overlap, you can’t before Halloween. Then I think you are in the clear.

Name three things you are thankful for this year.

I am thankful for my husband, my puppies, and that I get to do this job. It’s pretty amazing!

Do you have a favorite Christmas treat?

This is tough because I love Christmas albums. Once I figured out how to work the cd player I was all about that. I am really into the Bing Crosby Christmas album with the orchestra and also the Frank Sinatra one. My sister and I would pretend to tap dance to it every Christmas.

Favorite movie for the holiday season?

What’s been your favorite album/song of 2017?

This is tough, but I am going to self-promote. The Sam Smith album just came out and I have a song on it with him. He really is good.

About Cam
California-born singer/songwriter Cam emerged as one of the true breakthrough artists of the past two years, achieving her first Platinum record and first #1 country single with “Burning House,” which earned her a GRAMMY® Award nomination for Best Country Solo Performance. In fact, she was the only female country act to release a song in 2015 and amass a million downloads by the end of the year. The success also sparked Cam to six nominations for the 2016 Academy of Country Music Awards (most-nominated female), two nods for the American Country Countdown Awards and three nominations for the CMT Music Awards (tied for most-nominated artist), two nominations for the 50th Annual CMA Awards, and one for the 2016 American Music Awards. Her Untamed album on Arista Nashville/RCA Records, which released December 11, 2015, debuted at #2 on Billboard’s Top Country Albums chart with the year’s best first-week album sales by a debut country artist. Untamed
was met with widespread critical acclaim from The New York Times, Entertainment Weekly, PEOPLE, Associated Press, and many others. Cam, who co-wrote each of her 11 debut album tracks, has appeared on national TV programs including Good Morning America, Today, CBS This Morning, The Voice, The Tonight Show, Jimmy Kimmel Live!, The Talk, The Ellen DeGeneres Show, LIVE with Kelly, The Grammys, ACM Awards, and The 10th ACM Honors CBS special (with Alicia Keys). In addition to completing her first headline concert series, 2016’s The Burning House Tour, this rising country star opened two major 2016 tours: Brad Paisley’s Crushin’ It Tour and Dierks Bentley’s Somewhere on a Beach Tour. The Apple Music Festival 2015 in London, Stagecoach, SXSW, ACM Lifting Lives Party for a Cause, CMA Music Festival, the Grand Ole Opry, and the C2C Festival in the UK and Ireland are among the many events in which Cam has participated over the past two years.