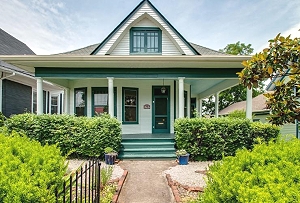 Dubbed the Portlandia of the South by the Washington Post, East Nashville is located directly east of downtown Nashville, across the Cumberland River. With its quirky flare, gorgeous homes and multicultural flavors, East Nashville has become one of the top choices to buy Nashville real estate.

In the early 1900’s, East Nashville was the place to reside for wealthy Nashvillians, but in 1916 a two-day fire destroyed 35 blocks of stately residential properties. East Nashville rebuilt itself replacing the Victorian Estates and Queen Ann style architecture with bungalows and cottages that have became the trademark aesthetic for East Nashville real estate.

Today, most of these early 20th century East Nashville bungalows and cottages have been kept beautifully preserved. Protected by historic districts, the allure of these quaint neighborhoods is unmatched anywhere else in the city.

One could easily find themselves visiting the Country honky-tonks on Broadway in downtown Nashville, only to be lured across the Cumberland River to this trendy, hipster, rock n’ roll scene. East Nashville, particularly the area around the convergence of streets known as the Five Points, is plentiful with bars such as 3 Crow Bar and Red Door East, live music venues such as The Basement East and The 5 Spot and excellent restaurants such as The Treehouse and Lockeland Table.

At the Urban Cowboy Public House, you can get yourself a cocktail and sit by the outdoor community fire pit. This parcel of land encases a breathtaking Bed & Breakfast paired with a rustic, yet trendy, bar featuring craft cocktails, seasonal bites & a large patio.

The High Garden Tea is a disconnect from technology (literally – they don’t allow it) and relax in this indoor fairy tale land of teas, herbs, organic bits and kombucha.

In the rapidly growing city of Nashville, East Nashville remains an alternative oasis for home buyers, renters, musicians and artists of all flavors. Keep your eye on a once overlooked area called Dickerson South that features many real estate opportunities along this East Nashville corridor.

Tell us what you want in your Nashville home and we’ll find it for you!