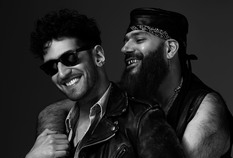 If you’re near “Thant” tent on Friday at 1:15am check out Chromeo. The legendary funk duo of Dave 1 (David Macklovitch) and P-Thugg (Patrick Gemayel), pride themselves as the longest-running Arab/Judeo partnership of all time. Their fifth LP, Head Over Heels, is out next Friday, June 15!

Head Over Heels continues the funk evangelism the duo have been spreading since their breakout 2007 release Fancy Footwork, which heralded the dawn of the return of maximalism. Their music is still recorded on all analog gear, much of which production whiz P-Thugg builds from scratch.

Best friends from high school, the duo are consummate tastemakers—Macklovitch holds a PHD in French literature from Columbia and an extensive collection of rare mid-century furniture; Gemayel is a major collector of vintage cars—the pair pride themselves on presenting high-low pop music to the masses.