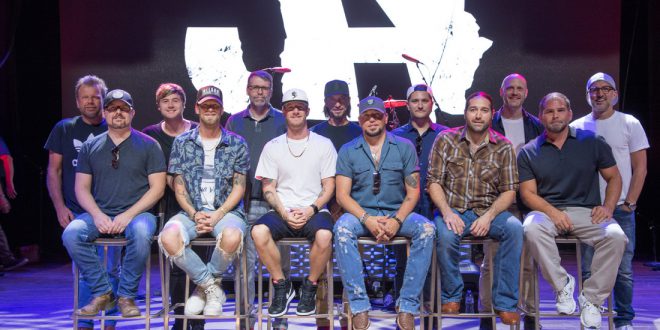 Two-time and reigning ACM Entertainer of the Year Jason Aldean took over Nashville’s Wildhorse Saloon Wednesday (8/02) to celebrate each single off his seventh studio album THEY DON’T KNOW reaching No. One. Marking 19 career chart-toppers, Aldean gathered alongside friends and family to perform  “Lights Come On,” “A Little More Summertime” and “Any Ol’ Barstool” with each of the tracks’ songwriters. For the event, fans were invited to Lower Broadway’s famed venue, which is the same place Aldean played the showcase that landed him his record deal with Broken Bow Records.

Serving as the lead single and No. One hit from THEY DON’T KNOW, Jason Aldean performed the smash hit “Lights Come On,” sharing vocals with songwriters Florida Georgia Line’s Brian Kelley (BMI) and Tyler Hubbard (BMI), as well as Jimmy Robbins (ASCAP), Jordan Schmidt (ASCAP), Brad Warren (BMI) and Brett Warren (BMI). The hit serves as Schmidt’s first No. One as a songwriter as well as the first for Kelley and Hubbard’s Tree Vibez Music publishing company.

Following suit, Aldean was joined on stage by songwriters Jerry Flowers (ASCAP), Tony Martin (BMI) and Wendell Mobley (BMI) to perform a stripped-down version of THEY DON’T KNOW’s second No. One single, “A Little More Summertime.”

To close out the round, Aldean invited Deric Ruttan (ASCAP) and Josh Thompson (BMI) to the stage who serve as the songwriters behind his “Any Ol’ Barstool,” as is the third consecutive chart topper off his seventh studio album. Aldean’s 19th career No. One serves as Thompson’s first No. One as a songwriter.
For more information and for a full list of upcoming tour dates, www.jasonaldean.com.