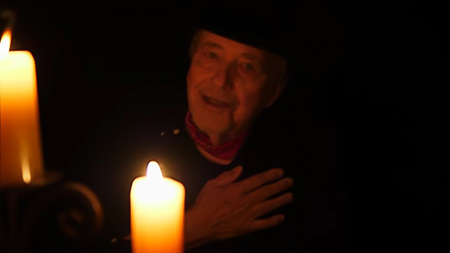 This year Bobby Bare celebrates 60 years as a chart-topping musician and the Country Music Hall of Famer is not slowing down any time soon. Yesterday, Bare released the music video for his emotional awareness song “I Drink,” penned by Mary Gauthier and Crit Harmon. The video brings a visual message on the sensitive topic of alcoholism and is open to many interpretations. The song is featured on Bare’s current album, Things Change, featuring a duet with Chris Stapleton, which can be found at fans retailer of choice here.

CMT Music aired the exclusive television world premier of the video Tuesday and the video is available to watch online now.

“’I Drink’ was written by one of my favorite songwriters, Mary Gauthier – she lived it. It’s a heart-wrenching story of alcoholism and the effects it can have on a family,” said Bobby Bare, adding, “I am proud of the depiction of the song through this video and hope it will sincerely touch people. If you’re struggling, get help, it could save your family and your life. I recommend AA as a starting point.”

The video was directed by Max T. Barnes (Hypermedia Nashville) and produced by Zach Farnum (117 Entertainment).