Steal Away at Oz Arts Nashville 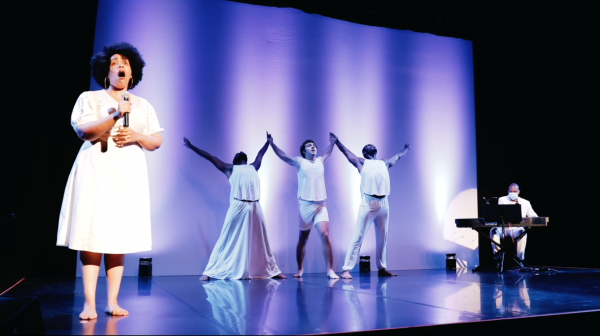 The long-awaited production tells a story of hardship, redemption, and spiritual renewal through interdisciplinary art forms and community celebration

More than 30 Local Artists Take the Stage at OZ Arts Nashville to Present Steal Away, a Powerful Collaboration Between Composer Dave Ragland and Choreographer Shabaz Ujima

Two-time Emmy-nominated Nashville composer, arranger, and director Dave Ragland leads the production. Pushing the boundaries of conventional opera narratives, Ragland reimagines traditional African American spirituals to tell a universal story of hardship, hope, and redemption inspired by the classic “Everyman” morality plays. Ragland’s acclaimed work was featured as part of Nick Cave: Feat. Nashville in addition to his work with Nashville Opera, Nashville Ballet, the Memphis Symphony Orchestra, and many others. He was also recently named “Best Go-To Composer” by the Nashville Scene.

Ragland is joined by core collaborator Shabaz Ujima whose choreography has appeared in several notable recent engagements, including work with Nashville Ballet, Nashville Opera, Shades of Black Festival, and Kindling Arts Festival. Ujima will lead a company of more than 20 dancers comprised of diverse movers, including featured artists from Rejoice School of Ballet and Friends Life in addition to his core group of dancers from his company shackled feet DANCE.

“This production has been in the works for years, but after several delays due to the pandemic, we could not be more thrilled to finally have Dave, Shabaz and their collaborators premiere this important and inspiring new work on the OZ Arts stage,” said Mark Murphy, OZ Arts Executive and Artistic Director. “We’re honored to feature so many innovative Nashville-based artists who will remind us of the power of our community and the collective healing we can bring about together.”

Ragland is also the Artistic Director of Inversion Vocal Ensemble, who will be featured in the work. Inversion is a regional touring vocal collective that has performed with Brandi Carlile, GRAMMY-nominee Ruby Amanfu, Marcus Hummon, and Levi Hummon, among others. The artists are also joined by a chamber orchestra from the local collective Diaspora Orchestra, which Ragland is also involved in.

The performances at OZ Arts will be preceded by several excerpted performances at local churches in the month leading up to the production, which builds on extensive community engagement that Ragland and Ujima have been participating in in local schools since Spring 2020.

Tickets for Steal Away begin at $20 and are available now at www.ozartsnashville.org/steal-away. OZ Arts is also invested in the health of its guests, artists and the overall community. Proof of vaccination or a negative COVID-19 test taken within 72 hours prior to the event is required to attend this event.

Amy Grant & Vince Gill Christmas at the Ryman – Get TICKETS!