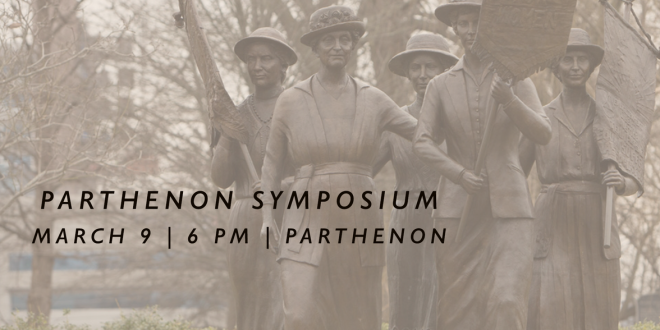 Join us for Women’s History Month at the Parthenon to see the current exhibits from 6 – 7 PM and then hear from our speaker, Alma Sanford, founder of the TN Suffrage Monument, as she tells us how the statue came to fruition.

Alma Sanford’s talk will fill in the details of how she was able to get eight other women from around the state of Tennessee to join her in raising private funding to commission noted sculptor/artist Alan LeQuire to create a fitting memorial to the Tennessee suffragists, that would be placed in Tennessee’s capital city.

She will tell a little about the first women who helped found Nashville – and her personal connection to some of them, as her ancestors. Then she will show that on their shoulders stood many women who came here or were born here – who helped create this city and fight for women’s suffrage.

She will tell some of the roadblocks the Tennessee Woman Suffrage Monument, Inc. board members had to overcome. Finally, she will talk about the work that continues today, to see that the monument is placed in its permanent home in Centennial Park, near the Parthenon where the suffragists marched and held rallies in the 1919s. And she will end by inviting the audience to participate in the Parade and the Dedication program in Centennial Park on August 18, 2020, where 12 women skydivers will jump into Centennial Park carrying “votes for women” banners and plumes of gold, purple and white ‘smoke.’

About the Suffrage Monument: Alan LeQuire’s sculpture at Centennial Park includes five women who were involved in Tennessee’s ratification of the 19th Amendment, granting women the right to vote. The figures are Anne Dallas Dudley of Nashville (front right), Frankie Pierce of Nashville (back left), Carrie Chapman Catt (national suffrage leader who came to Tennessee for the final battle – front left), Sue Shelton White of Jackson (back center), and Abby Crawford Milton of Chattanooga (back right).